As mentioned, Jenkins is a continuous integration tool which was first released in 2005. In the beginning it was developed as the Hudson project, but in 2010 an issue arose in the Hudson community and consequently Jenkins was forked in 2011. The development of Hudson was continued by Oracle. Nowadays Jenkins is being developed by Cloudbees.

Jenkins simplyfies the integration of changes into projects by providing a continuous integration system. It automates the build process and therefore increases the productivity, because developers are getting a response to their changes very fast. The installation and configuration is very easy. There is a large number of plugins available that you can use to customize your instance of Jenkins the way you need it.

Continuous integration (CI) is the practice of frequently integrating code changes with the main repository by merging all developer working copies with the shared mainline several times a day. The aim is to prevent a problem known as “integration hell”:

Developers work on a local copy of the main repository. Whenever someone pushes changes to the main repository these need to be integrated. This is no problem as long as no other developer had changed the code in the meantime, but in case the code has changed it is necessary to check whether the new push is effected by the changed code. If a lot of changes were made the developer is in the integration hell: he needs to spend a lot of time to integrate his changes to the revised main repository.

To wrap it up: CI ensures that developers are always working on code that isn´t “outdated” and changes are integrated in small steps.

Today CI is often implemented by using a build server to implement continuous processes for quality control which involve unit- and integration- as well as static- and dynamic tests, measurement and profiling of performance and extract and format documentation from the source. These measures have two aims:

If you want to use Continuous integration you should stick to its principles. Those are also wrapping up very good what CI is really about:

Jenkins integration with SonarQube and SCM-Manager

We integrated Jenkins in the Cloudogu EcoSystem, because we want to provide the basics for continuous processes or continuous integration. In our EcoSystem Jenkins is connected to SCM-Manager and the static code analysis tool SonarQube. 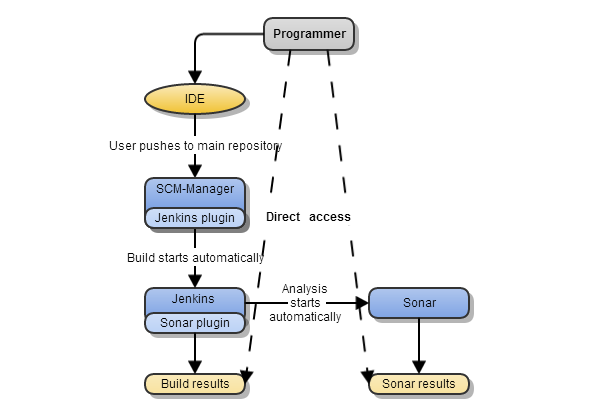 This workflow enables you to implement a CI process, because some of the principles are already considered:

The rest is up to you! Most of the other principles are in the hands of the users and the infrastructure: a build can only be self-testing if there are automated tests implemented, it is up to the developer how often he commits to the baseline, if no clone of the productive environment is available it can´t be tested, it´s up to the organization to make the deliverables accessible, if there is no test server available all the time, the deployment can´t be automated and the script for auto deployment needs to be written.

Try the toolchain with Jenkins yourself

If you’re already using Cloudogu EcoSystem, you simply have to install the Jenkins Dogu. During the setup, all the necessary configurations will be done automatically. If you don’t have an EcoSystem of your own yet, you should get an appointment for a live demo with us right away.

Note: On Oct. 2nd we adapted the post to Cloudogu EcoSystem