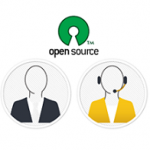 Hint: This post was migrated from our former blog about SCM-Manager Universe. Therefore, the design is slightly different and some information might not be 100% applicable to Cloudogu EcoSystem. So don’t be alarmed; enjoy reading.

What comes into your mind when you hear open source? Do you think about something that came up several years ago, which is now a trend in software development? Or do you think about something that was there from the early days of the computer age, went through a difficult time and is now celebrating a renaissance? In this post we give a condensed overview on the history of open source, its characteristics and a prospect on where it might go.

The concept and development of open source systems already started in the late 1960s and early 1970s. The intention was to make operating systems and applications more independent from their particular hardware platform or vendor. Most people associate the term “open source software” (OSS) with the name “Linux”, which was released in 1991, although it was not one of the first projects. “Unix”, the inspiration of Linux, was already developed in 1969.

Those characteristics ensure that everybody can take open source code and understand, change and extend it. A more obvious answer to the question is that the software is distributed under an open source license. The most common ones are:

Those licenses have one thing in common, they include the right to edit and redistribute the source code of software.

In the 1990s, when the first kernel of Linux was released, open source software was not seen as a serious challenge of the established proprietary systems. Because back then there was a lack of strong standards that open source projects could use. Therefore many different standards were used and it was difficult to interlink OSS. That is why proprietary models that were widely used (e.g. Microsoft products) yielded stability and user satisfaction (source). At the end of the 1990s the situation changed and some companies announced that their new products would support existing open source software (e.g. IBM announced that their next WebSphere Application Server would fully support the Apache web server). This lay the foundation of a revival of open source software. Nowadays it can be said that OSS is mainstream. 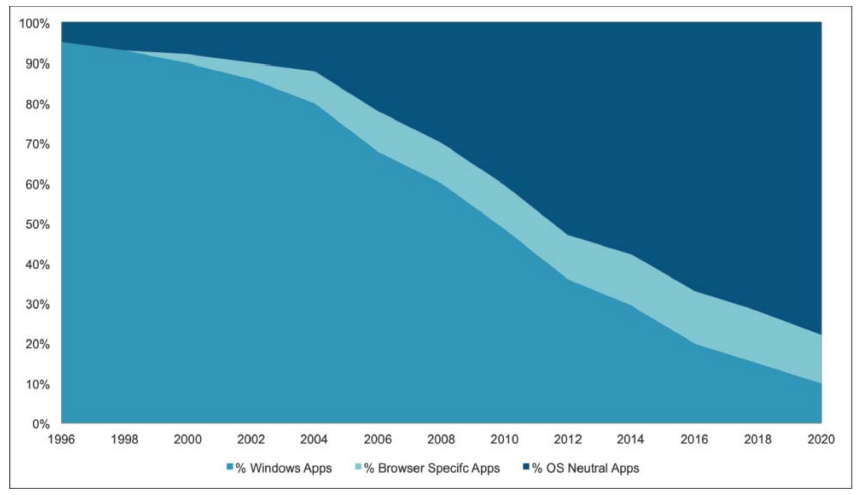 It can be seen that the share of open source applications rose from 5% in 1996 to 50% today and it will keep on growing. From 1996 to 2000 the graph stayed pretty stable. Till 2004 the share of OS neutral applications kept rising steadily. Until today the importance increased significantly. The forecast predicts that approximately 70% of all applications in 2020 will be operating system neutral. This leads to the question: Why is open source so successful?

Naturally this question is not easy to answer, because there is a wide variety of reasons. Let´s try it anyway:

Due to the high quality, open structure, customer satisfaction and passion open source applications are not only applied in private use. Companies are also using OSS more and more. The answers of companies from the automotive sector to the following question were as follows: “What is Your Company´s Relationship to Using Open Source Software in Your Products?” 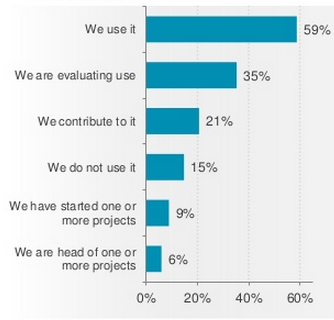 Despite this wide spreading, there are still barriers that complicate the first steps with open source software (source):

Those three obstacles can be overcome, because there are tendencies that counteract them: 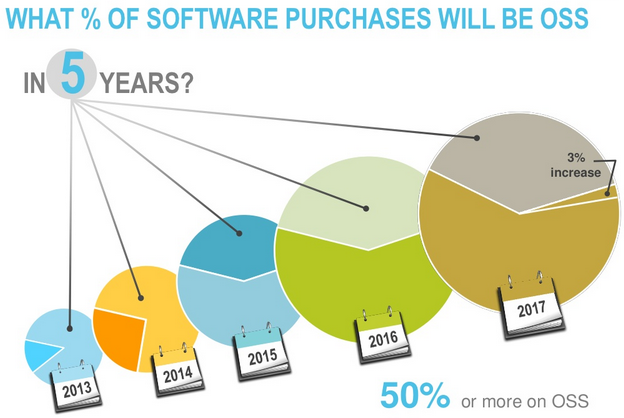 It is very likely that the importance and maturity of open source software will keep on rising, because more and more companies start contributing to open source projects. This could lead to a combination of the best aspects of the two worlds: the passion from open source projects and the professional capabilities of companies. It will be interesting to see where this cooperation will end up.

In our case (Yes, we are contributing to an open source project and offering support for it!) we came across SCM-Manager a while ago and started using it because of the advantages it provides. After a while we wanted to integrate SCM-Manager more into our systems, therefore we wrote the Bugzilla-Plugin and made it public.

Just like in our case, there are lots of companies out there that are using their resources to contribute to open source projects (see figure 2). These are win-win-situations. The company can implement a new feature on its own, the project is enriched by one feature, it becomes more popular and more people and companies contribute to it.

The success story of open source projects started a long time ago and it can be assumed that it will keep on (see the first figure of the post). The passion of the contributors, the problem oriented development and the resulting high user satisfaction will take care of that.