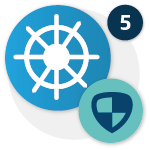 This article is part 5 of the series „Kubernetes AppOps Security“
Read the first part now.

The previous two articles in this series (Security Context Part 1, Security Context Part 2) explain why it makes sense to change the default values of certain settings in Kubernetes in order to improve security. The articles show you how these settings in Kubernetes can be optimized using the security context. This security context is generally specified for each container or pod. It can certainly make sense in practice to use a security context: In smaller teams, it is easy to determine which options should be set and then roll these options out successively to all applications. In addition, with the security context, it is easy to test whether applications still work with more restrictive security. However, there are also use cases in which it makes sense to change settings across the cluster: For example, in a new cluster you may want all future applications to start with the least privileges possible. In larger organizations or in situations where a larger group of staff have access to the cluster, this ensures that everyone adheres to the specified security guidelines. Both can be implemented in Kubernetes using Pod Security Policies (PSPs).

You can find out below by way of the following examples how PSPs can be used. If you want to try it yourself in a defined environment, you will find complete examples with instructions in the “cloudogu/k8s-security-demos” repository on GitHub.

Overview of how PSPs work

In contrast to the security context, it can be more complex to use PSPs. Therefore, first let’s provide a brief overview. And then we will consider the individual points in more detail in the succeeding sections.

The latter is the reason why the PSP Admission Controller is disabled by default. Before enabling it on a running cluster, a PSP should therefore be imported and authorized for all service accounts. Otherwise, there is a risk that no more pods will be able to be started. We will devote the following paragraphs to describing how you can do this.

There are a large number of settings that you can restrict or set in the PSP. The official documentation and the API description can help you with any specific requirements for specifying cluster-wide settings. The documents include some examples to help you get started with the topic. With the settings, unfortunately, it is not always clear what the default value is and whether the settings are checking values in the pod (and rejecting the pod, if necessary) or setting or overwriting them. We will discuss some specific examples of the various behaviors later in this section. Experience shows that pods are rejected if they apply explicit settings in the security context that do not correspond to the PSP. If no values are specified in the security context, the values from the PSP are set. The UserID, which is specified by the image, may also potentially be overwritten as a result. This behavior effectively realizes cluster-wide default values. The greatest challenge remains selecting which values should be set. As always, you have to make a compromise either in favor of usability or security.

This article shows how the good practices that we have elaborated in the previous articles based on the security context for each container can be transformed into a cluster-wide PSP. Listing 1 shows this PSP (slightly shortened from “cloudogu/k8s-security-demos”). The first line of the listing shows that PSPs in the Kubernetes API are still in the beta stage. We discuss this topic in more detail in a separate section.

Listing 1: PSP that defines cluster-wide settings from previous articles (and others)

In addition, the PSP ensures that settings whose default values make sense in terms of security cannot be changed in the security context of the pods.

After the PSP is defined, it must be enabled. This is done by authorizing a service account for the use of a PSP via RBAC. If a pod is started with this service account, the admission controller determines the associated PSPs and enforces them. The behavior with several PSPs per service account is described in the next article.

The assignment is defined in RBAC either per namespace (using “Role” and “RoleBinding”) or cluster-wide (“ClusterRole” and “ClusterRoleBinding”). Here, too, it is possible and useful to create a specification in YAML, since this can be placed under source code management. However, experience has shown that it is faster to generate YAML. Listing 2 shows how the PSP described in Listing 1 can be enabled cluster-wide by authorizing all service accounts to use the PSP via a group that is available by default in Kubernetes. As long as the use of no other less strict PSPs is permitted in the cluster, the values of the PSP are used for each pod in the cluster. Listing 3 shows the YAML representation:

Listing 2: Script to generate YAML that enables a PSP cluster-wide via RBAC (Kubernetes 1.15)

Listing 3: ClusterRole and ClusterRoleBinding that enable a PSP cluster-wide via RBAC (Kubernetes 1.16+)

The Kubernetes version must be observed for both listings. The next section describes what this is all about.

The status of PSP in the Kubernetes API

As you can see in Listing 1, the PSPs in the Kubernetes API are still in the beta stage. For many products, beta stage implies they should not be used in a production system. With Kubernetes, however, all this means is that the API can still change. Historically (before Kubernetes 1.19), many Kubernetes resources (such as deployments, for example) were in the beta stage for a long time, though they were still widely used in production systems. PSPs were introduced in Kubernetes version 1.8 in the “extensions” API group. Since Kubernetes 1.10, they have been in the “policy” group (kubernetes/enhancements. Issue #5). As of Kubernetes 1.16, the “extensions” group, which is now deprecated, has been disabled by default (Kubernetes Issue #70672).

In practice, unfortunately, it turns out that enabling via RBAC in versions up to and including Kubernetes 1.15 only works with the “extensions” group. In subsequent versions, only the “policy” group works (see “ClusterRole” in Listing 3). To make matters worse, generation (Listing 2) only works in versions up to and including Kubernetes 1.15. In subsequent versions, an error occurs. However, it is fixed in Kubernetes 1.18 (kubernetes Issue #85314). Therefore, you need to keep the Kubernetes version in mind when enabling PSPs. In addition, if you enable PSPs on Kubernetes versions earlier than 1.16, you must remember to adapt the (cluster) role bindings when migrating to the next version. We will share some tips for finding errors with you in the next article.

On the eve of the release of Kubernetes 1.18, it doesn’t look like PSPs will be exiting beta anytime soon. Generally speaking, it has been shown that PSPs are complex to use, which has prompted discussions of various alternatives (kubernetes/enhancements. Issue #5). For the time being, PSPs remain the easiest way to make default settings more secure across the cluster. After all, the mechanism is a built-in Kubernetes tool and does not require any additional infrastructure. A future alternative to PSP could be the “Gatekeeper” policy controller of the Open Policy Agent project. It is a sibling project of Kubernetes within the Cloud Native Computing Foundation (CNCF). It remains to be seen when all PSP features will be able to be implemented with Gatekeeper and whether it will be easier than using PSPs.

This article shows how the good practices for security settings in Kubernetes that we described in previous articles can be enforced cluster-wide using PSPs. In addition, it also demonstrates additional useful settings that can be set with PSP. This is all shown using the general functionality of PSPs: First the PSP resource is defined, then it is enabled cluster-wide via RBAC, which leads to the evaluation of the PSPs by the admission controller. It is important to note that the admission controller must be enabled on the API server or on the managed cluster. Another pitfall that we covered is the group of PSPs in the Kubernetes API. Here there will be differences depending on whether the system is running Kubernetes 1.16 or earlier. In general, PSPs in the Kubernetes API are still in the beta stage. Nevertheless, there is currently no easier way to make Kubernetes default settings more secure on a cluster-wide basis.

The article is limited to the simplest use case: There is only one PSP, and all of the pods can be started with it. In general, this is recommended, because it means that all pods will run with the optimized security settings. However, at runtime, the challenges that we described in the previous articles also apply to PSPs. For many images smaller adjustments need to be made so that containers can be started from these images with settings optimized for security by the PSP. In practice, you may also encounter cases where, for example, applications that were not written by the user cannot be executed with these settings at all, because these applications can only be run with “root” user privileges. The next article in this series will show how individual pods can be started with a less restrictive PSP.

You can download the original article (German), published in JavaSPEKTRUM 04/2020.

This article is part 5 of the series „Kubernetes AppOps Security“.
Read all articles now: