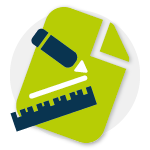 Prototyping is a great way to get an impression of how a product could look like. For sophisticated prototypes you can use e.g. 3D printers in manufacturing or write code in software development. For less sophisticated prototypes there are also simpler and faster approaches. We want to give a short introduction into software prototyping, because it can help you to develop better software, faster (but of course only if done right).

Pros and Cons of Prototyping

When you ask people about software prototypes you either get answers like “Oh that’s a waste of time and money!” or “Yes, prototypes, they saved us a lot of trouble.” As always, prototypes aren’t a cure for all problems and come with pros and cons.

The purpose of prototypes is the evaluation of certain aspects of a software product, e.g. UI design, architecture or functionality. For that, an incomplete version of the software program can be created to verify a concept or idea. A prototype omits all aspects of the software that aren’t required. This reduces complexity and effort. Prototypes help you to …

Especially for feedback prototypes it makes a huge difference how close to the real product a prototype is supposed to be. The simplest kind of prototypes, pen and paper can be done within a few minutes. These prototypes visualize ideas and create a common baseline so that the idea can be discussed. The next step are wireframe prototypes, which are a simplified version of an UI. They can be created with pen and paper or with special software tools. The advantage of these prototypes is, that they can visualize more complex ideas and whole processes. The highest level of prototypes are coded applications that omit non-essential aspects of the application. These prototypes are already very close to the final product and can therefore provide very concrete feedback. Their downside is, that their development can take quite long and that people might mistake the prototype for the real product.

If the prototype looks very much like the actual product, users should be informed that they are dealing with a prototype and that some features might not be working. If they are not informed, there is a huge risk of confusion and disappointment, which could ultimately lead to a rejection of the idea. Also, it is important to inform stakeholders about the specific weaknesses of the prototype (security, architecture, functionality, …), because they should be aware that the prototype is not made for usage in production. If those weaknesses are not addressed, there is a risk that it will be demanded to take the prototype to production.

Once a prototype has served its purpose, you should throw it away and start to develop the “real” product or to develop another prototype. Generally, a prototype should not be evolved into the final product, because during the development of the prototype fundamentals of writing high quality applications are neglected, because the aim is to get a quick result you don’t spend much time on “irrelevant” topics like security, scalability, code quality or architecture. The real product on the other hand should be well designed.

Development of a Prototype

Before the develop a prototype starts, its ideal extend should always be evaluated. A prototype should always be as small as possible and just big enough to evaluate the idea. These questions help to decide how much functionality and detail the prototype needs to cover:

Once the answers to the questions are clear, the development of prototypes can be started. Normally it is divided into four steps:

The last two steps can be repeated until the customers’ expectations are met or until other constrains like time, budget or technical feasibility urge the stop of the development.

For UI-prototypes it is the goal to get an idea of what the UI should look like without the need to develop a fully functional UI right away. Helpful tools are:

Prototypes are a great way to gather valuable feedback about a product idea early on and thus to increase the chance of success for the product. To successfully use prototypes, it is important to know exactly what they are supposed to prove and to be aware that there are different kinds of prototypes with different strengths and weaknesses.